I’m really excited writing this, as I have such a lot to tell you about my recent trips and the fish I’ve managed to catch. So let’s get started. I had a full two days this week, Monday and Tuesday, these seem to me to be the least busy days as regarding fishing pressure. However its still very busy, even on quiet days, fortunately most people get set in a swim and don’t move once settled.

This week I choose pits 1 and 2 both have nice fish in to around twenty pound or so. The weather on day one was difficult, cloudy, rain, and a cooler east wind pushed across all the lakes. When the sun did poke its head out, fish could be seen, and would feed in the margins. I have been using a few crushed tiger nuts, maybe six along with a single one and my hook bait, the smallest I can find in the tin. Along with a pinch of hemp and maybe an odd 2/mm pellet. Thats it, the amount would just cover the palm of my hand, or half fill the mini pocket rocket (yellow) from Gardner.

Most anglers use far too much bait when fishing for carp, I plan just to catch one fish out of the edge at a time, that’s a simple mouthful. The fish then continue to look around the  swim for more food, then move on, returning over time. If I managed to get my one fish I can repeat the feeding all over again. With such tiny baits the carp are not frighten, do not see it as a dangerous situation, and take the bit will great confidence. It means you don’t have to use complicated rigs, in fact I don’t balance the tiger nut anymore. I prefer the bait to remain heavy so the fish has to really suck at the bait. If I want a balanced bait, I’ll use plastic corn to sit just on top of my free offerings, at times a bag is more suitable. 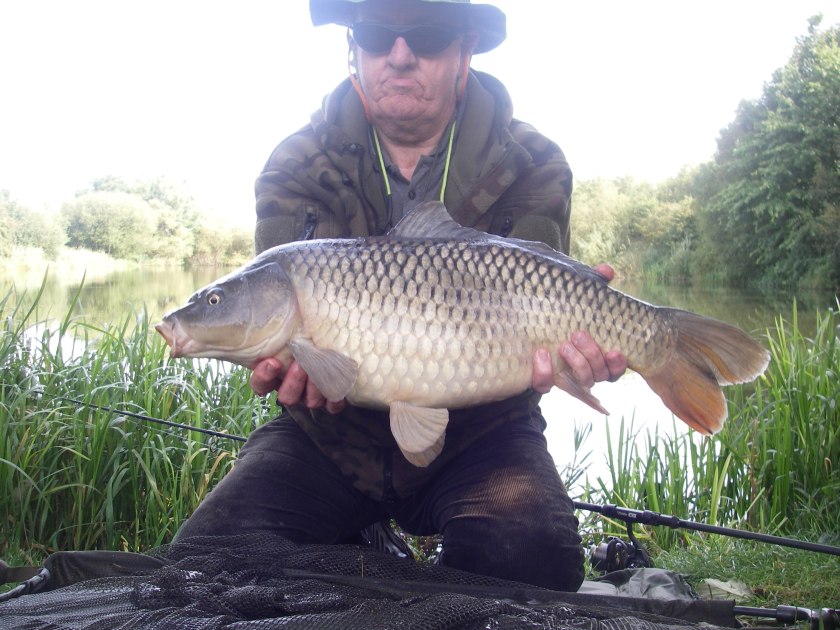 I like a supple braid hook link if possible, four inches long. A tiny bag the size of a golf ball (not a tennis ball) really that small, full of the items mentioned attached to the hook, saves me thinking about tangles after casting. I cannot over stress the need for neatness and small amount of bait, think one fish at a time. I use a small hook, size 8s x strong. Attached to this is a 40lb Nash supple leader 6′ long that sinks quickly, and is abrasion resistant,  a 20lb main line, with my 3.5lb 9′ Century CQ rod. It allows me to fish in places others find difficult, like near snags. Every swim gets a review for fish safety, if you’re quiet and bait as I suggested, fish will move out of the snags to feed. Too much bait and you’re buggered, I really don’t know just how little amount of bait you could feed, but they know form yards away it’s there.

Anyway, day one and I found some fish moving along the margins. I dropped some bait in to intercept them and before too long fish were on the bait, looking for more. Crushed tigers are such a puller for big carp, just a few nuts crushed and two whole will work really well. I don’t use a rod rest set up as many do, the rod just lays across the grass or most often, my landing net. Takes are aways savage, with the rod being pulled towards the fish in a fighting curve, the clutch begrudgingly giving line. The first fish a nice common of 15lb did mange to get under the trees, but the CQ rod was too much for it, and it was landed and released after having its picture taken. The second fish came after I’d been baiting and waiting some time, I thought the carp had gone when all of a sudden, the tip was under the water and the clutch giving line. After pulling it from the rushes, the second time a nice 17lb common was landed and returned. The second day was like a re-run of the first but the fish just a little smaller 11lb 13lb, but from another one of the smaller pits.

I cannot tell you reader just how much fun and productive carp stalking can be, you have to get into it and do it right, and it takes a few trips to work it all out. But once it all comes together, you don’t look back. I really don’t know how long this will keep going as it gets colder and the fish slow down, but they still have to have their autumn feed yet?

Retired and fishing as much as I can. View all posts by Fishermanrichard.

One thought on “Stalking, getting it just right!”

This site uses Akismet to reduce spam. Learn how your comment data is processed.